Better flood defences that reduce the risk of flooding to more than 1,400 homes in Exmouth have been built.

The Environment Agency and East Devon District Council have spent £12 million of Government funding, building new and improving existing defences at The Royal Avenue, Camperdown Creek and The Esplanade.

The flood risk to residents and 400 businesses in the area has been reduced from a 4% chance of flooding every year to a 0.5% chance. This accounts for climate change and rising sea levels, with the option of improving the defences in the future. Further improvements should not be needed before 2045 based on current predictions.

Exmouth’s new flood defences and further schemes across the country will be more important than ever to build a more resilient nation against greater weather extremes.

This is why we are pressing ahead with our record £5.2 billion investment in flood and coastal defences across England.

I hope Exmouth’s added protection will bring much needed peace of mind to homeowners and give businesses the confidence to invest and grow.

Exmouth was at significant risk of flooding before this project began.

These new defences have drastically reduced that risk of flooding as well as taking the future into account so people and businesses can continue living and working here.

The protection of people’s houses, shops and businesses from flooding is a key objective of East Devon District Council`s initiative on combating the effects of climate change.

We are most grateful for the help and assistance of the Environment Agency and contractor Kier in providing this tidal defence scheme. Also, to the team of volunteers and staff who will be operating the flood gates for the years to come.
Flood embankments and walls were raised between the outfall of the Withycombe Brook and Imperial Recreation Ground and between the Imperial Recreation Ground and Camperdown Terrace.

But a large proportion of the work has been along the sea front, including the Esplanade from the Grove pub in the west, to just beyond the clock tower in the east. The Esplanade between these two points will be allowed to flood in extreme conditions, however, the new walls and flood gates will prevent this water from flowing into Exmouth. New drainage infrastructure will return flood water to the sea once the storm has passed. 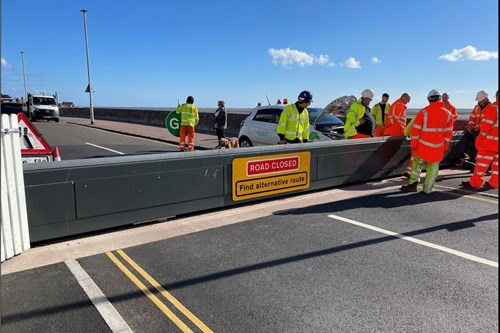 Exmouth tidal defences were also one of the agency’s first ‘talking’ flood defences to engage interested passers-by in text conversation about its development as well as offering further advice to be flood aware.

Are you a journalist? Are you looking for information about East Devon District Council? To find out more, please visit our "for journalists" page.