The unsung heroes who help keep East Devon’s towns looking beautiful have received special thanks, after Exmouth and Sidmouth won a plethora of special regional and national ‘in Bloom’ awards.

Both towns have been awarded the highly coveted South West in Bloom Gold Award for 2022, among a trophy case of other accolades.

Exmouth has also had special recommendations, being earmarked to represent the South West in the Britain in Bloom finals in 2023.

Sidmouth did extremely well this year, taking home gold in the ‘Coastal Town Category’ of Britain in Bloom as well as the Sargent Trophy for outstanding effort and dedication, the Plantscape Coastal Trophy for the best coastal town in the South West and the Michael McGahey Trophy for exceptional community effort.

Sidmouth in Bloom’s chair Lynette Talbot and secretary Peter Endersby were also both named Britain in Bloom Community Champions – only 11 people in the whole of the British Isles received the title.

This fantastic news came shortly after EDDC’s Sidmouth Streetscene team leader Alan Fowler retired, after 40 years of working with volunteers and helping to make Sidmouth an award-winning town. Graham Trude and Wayne Harris are now leading the way with a very experienced team behind them.

Exmouth in Bloom recently won St Bridget’s Cup for being the best large town in the South West, the Barry Cruse Trophy for having the best website and The Sponsors’ Trophy for the ‘Most Meretricious Entry Overall’.

EDDC’s Exmouth Streetscene team leader Adam James is very excited about the chance of Exmouth becoming the overall winner of Britain in Bloom next year and when asked how he felt about the prospect said: “Bring it on.” 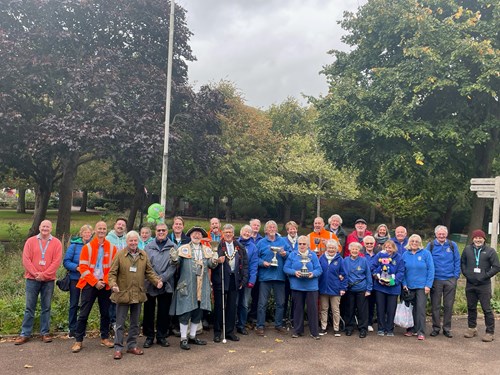 These prestigious awards reflect a massive team effort between EDDC, the town councils and ‘In Bloom’ volunteers.

I know that a lot of these local heroes’ efforts go unsung when the accolades are awarded, so I would like to take this opportunity to congratulate everybody involved but in particular EDDC’s street cleansing teams, who sweep the streets, litter pick, empty bins and weed the town; the grounds teams, who have undertaken incredible efforts to keep our green spaces and ‘In Bloom’ displays looking amazing throughout the prolonged summer drought; the team leaders and area officers, who rallied the troops to ensure our towns look exceptional; and the parks and gardens officers, who oversaw Sidmouth in Bloom’s/Exmouth in Bloom’s work from their initial consultations through to attending judging events. Excellent work, all.

I am immensely proud of the team effort that has gone into a bumper year.

While the judging takes place over a few days, the work that goes on is 365 days a year, and a reflection of fantastic partnership working between EDDC, town councils, In Bloom groups and other volunteers.

I would like to make special mention to our two parks officers – Russell Giblett and Paul Fealey, and the Exmouth and Sidmouth grounds and cleansing teams, whose care, attention and dedication to making these towns look their best often goes undetected.

Congratulations all and I look forward to building on these results next year.

If you would like to volunteer to help keep your town looking beautiful, while meeting new people and learning about gardening contact EDDC here.

Are you a journalist? Are you looking for information about East Devon District Council? To find out more, please visit our "for journalists" page.