In 1897, the Gardens we know today were simply a large field opposite Seafield Terrace, which is where many of the local sports meetings and celebrations occurred. Before this, however, the area was used as a farm pasture.

During World War II, Seafield House was destroyed by a German bomber, killing Major Cartwright and his family. This was the only building to be bombed in Seaton during the war, and it is felt that the intention was for the plane crew to ditch their remaining bombs over the sea. Prior to this, Seafield House stood in front of where the Jubilee Clock currently stands. After the tragedy, the area was turned into a water feature with a large rockery and waterfall. This has since been predominantly removed and a small amphitheatre put in its place. A small lily pond remains in front of the Jubilee Clock that contains a variety of small fish.

The Jubilee Clock was built in 1887 and, over the years, has become the most familiar landmark in the Gardens. It was built to commemorate Queen Victoria’s Golden Jubilee. It has also been used by the local fishing fleet as a bearing marker for returning to the safety of Seaton bay and harbour. In 1994, the original clock workings were removed and put into Seaton museum. In 2010, the clock face and the chiming bell were renewed, and the brick tower was repointed. A local blacksmith was commissioned to fabricate a complete new weather vane, which crowned off the renovation work. 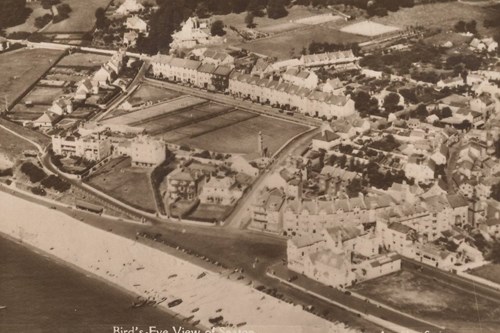